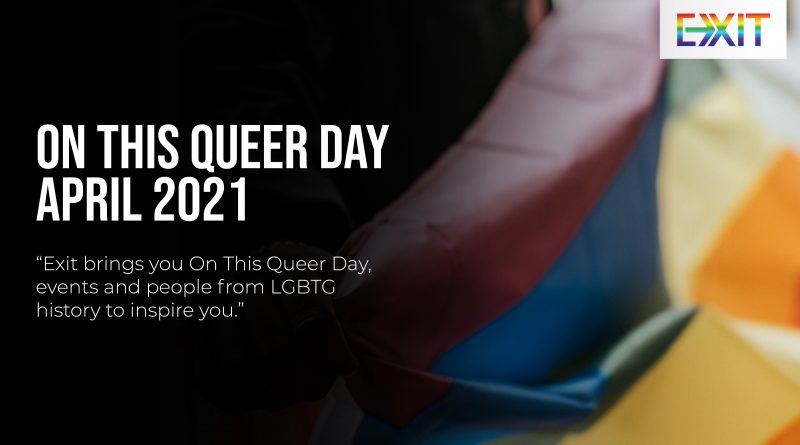 This month, before we proceed with April in LGBTG history, I want to touch upon a single fact regarding the entries you encounter in this column for all the days of every month. And the fact is that the entries overall comprise cases and LGBTG history from across the world, but they most often comprise cases, people and events from the USA and pertain to the quest for LGBTG liberation and rights in the USA and the American LGBTG experience. This week, for instance, a handful of entries were picked to reflect the treatment of LGBTQ people in education historically, to make it a sub-theme and to highlight the progress of LGBTG activism and representation at educational institutions, at universities, on campuses and in schools – and all four entry cases are from the USA.

From this fact is inferred and derived a very important and fascinating and interesting subject: The extent to which LGBTQ activism and the struggle for LGBTQ rights in other countries across the world assumed the format and parameters of the LGBTQ activism and the liberation struggle in the USA and the extent to which the lives and experiences of LGBTQ people elsewhere have come to be and reflect the American LGBTQ experience. As far as this column is concerned, LGBTG history elsewhere is not as well recorded and documented as in the USA – I, for instance, lack an online or bibliographic source that comprehensively chronicles LGBTQ history and experience in South Africa. I don’t have a chronological record of people and events who and which marked the struggle for LGBTQ rights in South Africa – if any readers know of helpful sources that can fill this column out with more South African entries, you can email me at adriaanvandenberg2@gmail.com.

If you know of any literature on the theme of the universality of the American LGBTG experience and on the relationship between local LGBTG matters and lives and American LGBTG culture and experiences, also do let me know.

And finally, let me say: Winter is coming! And nature will still bring and hold something lethally threatening to South Africans this winter, something tiny, ugly, nasty and mean. We just have to be a little mindful during this year’s winter and so, I’m going to bolster my readers a bit and maybe give them just that little reminder and the bit of encouragement needed for them to not give up fighting and being vigilant and careful and to keep taking care of themselves and others – I’d be upset and distressed to lose a reader because they fault me for bad writing, but I won’t hold with losing you to that goddamn microbial spiked tennis ball.

Here is Your Month of April in LGBTG History:

1st of April – A group of people including homosexual activists who attacked a German Nazi centre on the 27 of March 1943 were all arrested on this day, the 1st of April 1943. Willem Arondeus, their leader importantly declared “Let it be known that homosexuals are not cowards.” He was a Dutch artist and author who also helped bomb the Amsterdam public records office to disrupt and prevent the Nazi identification of Dutch Jews. Four months later the Nazis had executed him.

2nd of April – Uruguay legalised same-sex marriage on this day in 2013 becoming the fourteenth country in the world to do so.

3rd of April – Universities are usually liberal institutions and tolerant environments, but in 1959, and on this day the University of Florida still fired 14 employees and removed 50 students for being gay.

4th of April – The Gestapo decreed on this date in 1938 that men found to be homosexual will be sent to the concentration camps. Between 1933 and 1945 when WW2 ended, 100 000 men were arrested for being homosexuals. 50 000 were sent to prison while between 5 000 and 15 000 were sent to the camps. What is little known is that some of the latter men remained in prison until 1968 because German law prohibited and criminalised homosexuality until that date.

5th of April – In the USA in 1982, on this day Newsweek Magazine covers “Gays on Campus” stressing how prevalent and acceptable gay organisations and lifestyles had become on American campuses.

15th of April – On this day in 2014, India recognised the third gender not as a social or a medical issue but as a human rights issue.

16th of April – Found in the Monastery of San Salvador de Celanova, records indicating that on this day in 1061 the first same-sex wedding occurred when Pedro Díaz and Muno Vandilaz were married by a priest in a small chapel in Rairiz de Veiga.

18th of April – The American Psychiatric Association lists homosexuality as a sociopathic personality disorder in the first publication of the “Diagnostic and Statistical Manual of Mental Disorders” on this day in 1952 – and provokes criticism from medical and mental health professionals for lacking empirical evidence and a scientific basis for its classification and treatment of homosexuality.

19th of April –On this day in 1967, the Student Homophile League at Columbia University became the first gay group to obtain a campus charter. The SHL had twelve members who fought with university administrators for a year before they received official recognition. Their story was covered by the New York Times.

20th April – On this day in 1969 Frank Kenny ordered 100 “Gay is Good” buttons which is regarded as having signified a move away from conforming and fitting into celebrating gay lifestyles in the American gay movement.

22nd of April – And the anti-bullying movement in schools followed such cases as Jack Denton Reese, a gay Mormon teen who committed suicide on this day in 2012 in mountain Green, Utah after having been bullied at school – after which a panel was convened on the case and the movie “Bullied” was screened with the panel meeting.

24th of April – The advent of an epidemic: The first case of Aids in the USA is reported to the Centre for Disease Control on this day in 1980.

26th April – Oscar Wilde is prosecuted for charges of gross indecency and sodomy which he denies on this day in 1895. On the stand, he would say that homosexuality “is beautiful. It is fine. It is the noblest of affection. There is nothing unnatural about it.” 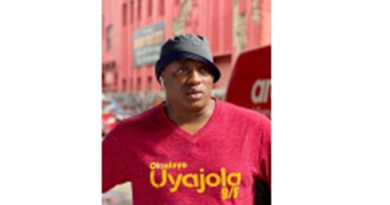 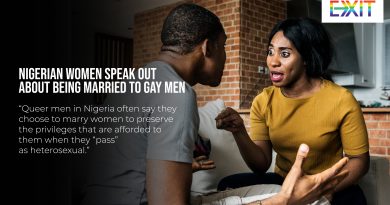 NIGERIAN WOMEN SPEAK OUT ABOUT BEING MARRIED TO GAY MEN 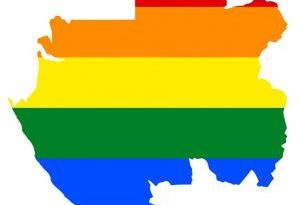