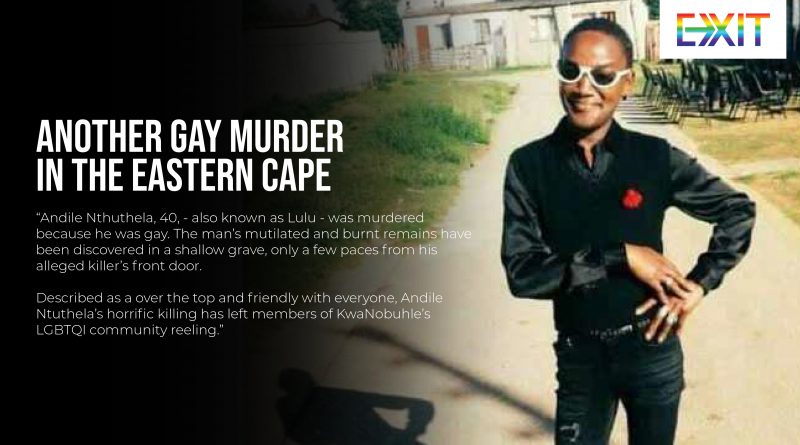 Andile Nthuthela, 40, – also known as Lulu – was murdered because he was gay. The man’s mutilated and burnt remains have been discovered in a shallow grave, only a few paces from his alleged killer’s front door.

Described as a over the top and friendly with everyone, Andile Ntuthela’s horrific killing has left members of KwaNobuhle’s LGBTQI community reeling.

A 28 year old man who allegedly butchered and murdered Andile Ntuthela, appeared in an Eastern Cape
Court refused bail and the case is postponed till 1 June 2021 for investigation.

According to police, Nthuthela’s body was found 11 days after he was allegedly murdered as the suspect was hospitalised “for his mental condition”.

Eastern Cape police spokesman, Colonel Priscilla Naidu said that is alleged that on March 31, the suspect burnt his bedding at his house in Matana Street in Kwanobuhle

On 1 April 2021 , the family reported the malicious damage to property to police and indicated that they were suspicious that he may have been involved in some other criminal activity,” Naidu said.

She said police went to the house and found blood stains inside his room as well as outside.
“On 1 April 2021 until the 9 April 2021, the suspect was hospitalised for his mental condition. On his discharge from hospital, he was arrested and detained for the malicious damage to property. While detectives were questioning him, information emerged relating to the murder of Andile Ntuthela. Ntuthela was gay. On Saturday, 10 April 2021 police went back to the house with the necessary roleplayers and the body of Ntuthela was found buried in the yard,” Naidu said.

The 28 year old suspect appeared in the Uitenhage magistrates’ court on Monday,12 April 2021 on the charge of malicious damage to property and will be appearing today in the Kwanobuhle Magistrate’s Court for the murder of Ntuthela.
“The murder is suspected to be LGBTQI linked,” Naidu said.

The Gay and Lesbian Alliance of Outh Africa issued a statement calling “for harsher sentencing, the prioritisation of LGBTQIA+ communities, particularly the townships and rural areas to enjoy their constitutional freedoms of equal opportunities, justice and rights. 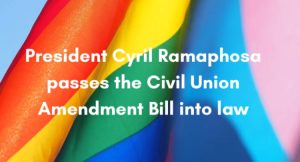 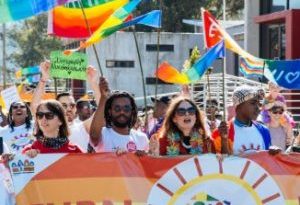 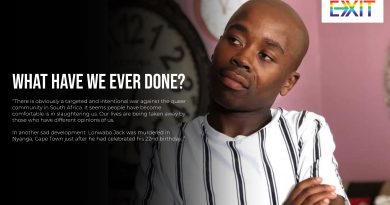 WHAT HAVE WE EVER DONE?