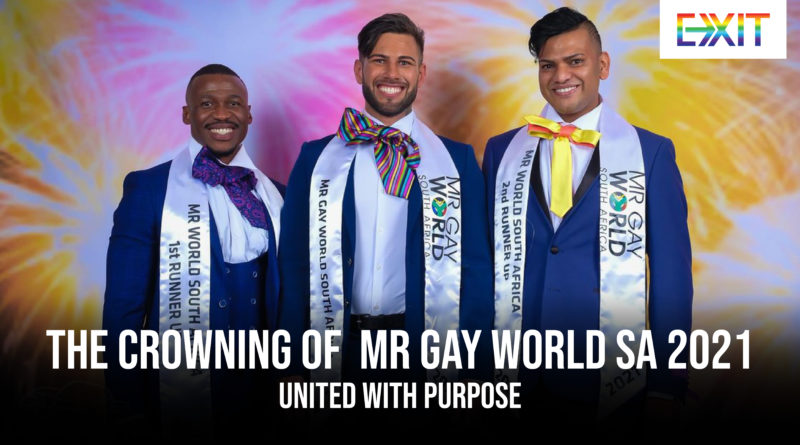 The weekend of May 21st and 22nd was a hectic one and a hive of activity at The Galleria in Sandton as we witnessed the crowning of Mr Gay World SA (Mr GWSA) on Friday and Mr World SA (Mr WSA) on Saturday. The two competitions which are both organised by the Edith Venter Promotions selected the winners who will go on to represent South Africa on the World stage. Mr GWSA and Mr WSA  are not only related because they have the same organisers, share sponsors, run on two consecutive nights but are linked by one slogan ‘’United with purpose”.

On the Friday evening 11 finalists, walked the stage instead of 12, apparently two pulled out and only one was replaced. Out of 9 provinces only 5 were represented namely, Gauteng, Western Cape, KwaZulu-Natal, Northern Cape and North West. The selection process remains unknown to this writer. At the end of the evening, Louw Breytenbach (31) from Boksburg, GP scooped the title and emerged as the winner, with Bonginkosi Ndima (37, from KZN) coming 2nd as the first runner up, and Shanon Kannigan (27) from Gauteng was 3rd. 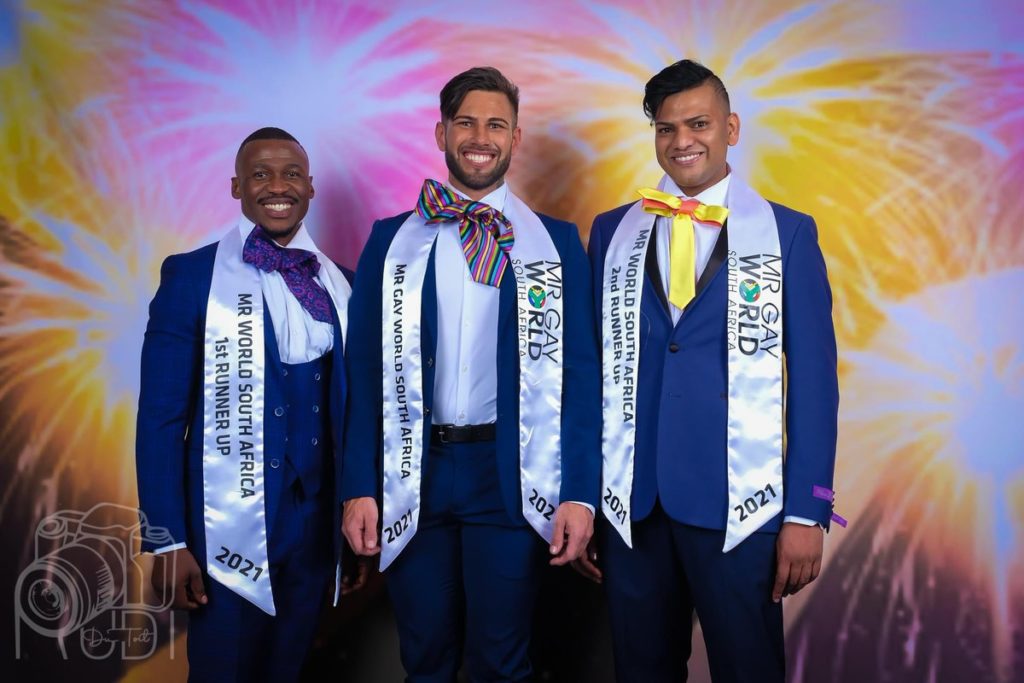 The audience were mostly male and white, especially on the night of Mr GWSA as compared to the evening of Mr WSA. We spoke to some of the sponsors, who we believe have been with the competition for many years. The sponsoring organisations vary from small enterprises such as gay magazines, fitness organisations, suit-makers, fashion clothing designers, restaurants to large corporates in the various industries such as hotel and accommodation, paint industry, etc. The judging panel was composed of five men, 2 black and 3 white.

In our research prior to the competition we spoke to a few members of the queer community some of whom have been following the pageant for many years, from activists to former contestants and judges. We learnt that there are a number of concerns about how the pageant is run: there is a strong sentiment that the outcome of the competition is pre-determined and a person of colour almost never wins; the pageant is old-fashioned and not relevant, amongst other many concerns. So we came up with a set of questions to try and find the views of organisers and some of the finalists on these concerns.

How long have you been organising this pageant for?

How do you select your judges?

Hare:  “Based on their experience with pageantry, for instance Alan Ford who has judged Mr SA prelims; Rueben van Niekerk who has been involved with Mr Gay World SA in the past; Tobie Jooste has experience with the pageants; Sibusiso Kotelo who was part of the IFBB Pro with experience with ‘muscling and how to walk’.

How does the management of the winner work, do you as the pageant organisers take over once the winner has been announced?

Hare: “We are just management from Mr GWSA side to ensure that they are part of the community, they build their brand and work for our charity, Wits Hospice. We book them for events and showcase them as the Mr GWSA brand.”

Social Media networks are filled with comments and complaints from people who say that no black men can win the competition, do you this is this true?

Hare: “I cannot comment on this because we have external judging, we do not get involved in the judging as organisers and we have an external auditor. We have had a winner that represented SA that was of colour.”

Do you feel that the winner will represent SA well?

Hare: ‘’We feel strongly about the winner based on all the judges’ choices and their results. He is a very strong candidate, he is going to great things especially with the community organisations he wants to be involved in.”

Besides the charity work, what else is the purpose of Mr GWSA?

Hare: ‘’He promotes LGBTQI inclusivity throughout SA and showcases that it is more than just being out and proud but that we do certain things with the community and that we make a difference in the world.’’

The two pageants are united by the slogan ‘united with purpose’, when did it start and how did it come about?

Edith Venter: “It started this year (2021), this is the first time that the two pageants have been united. We wanted to show that there is no stigma, regardless of your skin colour or creed that we are united with purpose. We are all out there to create a better world, a better country. Our country needs that, it is too fragmented so we want it to come together, going forward”.

The community is united but also divided, so how do you bring about unity when you still have a Mr Gay World SA, a male-only pageant which is not representative of every letter in the LGBTQIA+ acronym?

Venter: “For now it is Mr Gay World South Africa, in the years to come hopefully we will change that and incorporate other queer members, we would like to do that, I feel very strongly about that.

Corporate sponsorship budgets are very hard to come by especially now during lockdown, how did you pull this together?

Venter: “With sheer hard work, my knees are sore, I have been begging in the last few months. Some of the artists worked pro-bono, we have worked for no remuneration.”

The pageants have been accused of being racially-biased and misrepresentative in every way and lack diversity, what do you have to say about that?

Venter: “I don’t think so, if you look at the run-up, there were many young black gentlemen (in the Mr WSA competition) but winners are chosen through our judges, we as stakeholders step-back, the judges panel was very inclusive. Last year’s winner (Mr WSA’s), Dr Fezile Mkhize who is black man came runner-up in the international competition.”

It is said that the outcome of Mr GWSA is rigged, do you agree?

Venter: “Mr GWSA 2018 was a black man, we were not the organisers then, I can’t remember his name. I think that there will be many black men who win this competition in years to come.”

Why do you think in 2021 it is important to hold Mr GWSA? How relevant is it to society?

Louw Breytenbach: “These pageants have a place in society, not only to raise awareness about important issues in the community but also to create voices that are more than just body, beauty and looks, that are stereotypical. What makes it special this year is that my fellow contestants came from different backgrounds, religions, races, cultures, body types, it was so good to break that mould, we can maintain that diversity and inclusivity within the pageant”

Do you think this pageant should continue is its current format or are there things you think should change such being more queer-wide representative?

Breytenbach: “There is a challenge definitely, currently there is no international platform for non-gender confirming members. We need to interrogate why there is no platform for our fellow ‘alphabet warriors’. It is important that as Mr GWSA we are open to transformation and inclusivity.”

Shanon Kannigan: “I am in the banking industry, this has been an opportunity for growth for me, I think therefore this competition should continue.”

How do you feel about the outcomes of last night?

Ezekiel Molefe: “The outcome was amazing, I hoped to be in the top 5 but I was very happy that some of the finalists made it (into the top 5).’’

How do you feel about the current representation, are gay men and SA represented well?

Molefe: “I am happy that there are organisations that support us as gay men, in the past we didn’t have organisation that stood for us and fought for our rights.’’

What inspired you to enter the pageant”?

Shannon: “To bring about diversity, I have a different body type”

Molefe: ‘’I want to grow myself as a brand, represent my community, to fight issues such as the pandemic instead of fighting amongst ourselves within the community. I run an NGO where parents can ‘drop-off’ their unwanted infants, if for instance they gave birth to a child by mistake and they do not want the baby. I hope that this pageant gives me a platform for fund-raising for my NGO’’

Do you think that there should be a different pageant for Mr GWSA to Mr WSA?

Kannigan: “Yes, to give recognition to gay people, to make anyone within the queer community including trans people to feel free to enter the competition.”

What qualities should the overall winner of Mr GWSA have?

Shanon: “He should not be afraid to be vulnerable, that is what people connect with and relate to. Someone who can relate to small communities and charity, someone who can encourage and give people confidence.” 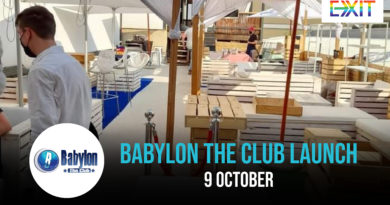 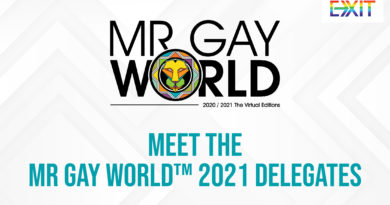 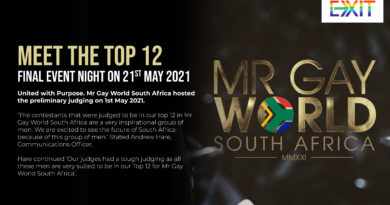