Academic achievement is the extent to which an individual has achieved either short-term or long-term educational goals. Raised by mom and dad, a first-born child with two siblings, Cameron Modisane has always been hungry for academic success from a younger age.

Growing up in Springs, Kwa-Thema, Cam (as I prefer to call him) was always a bookworm and a top academic achiever. A Springs Boys’ High School Alumni who started embracing his sexuality when he got to university at 18 in 2005.

At primary school he loved working with numbers and was good at it, he helped fellow students who were struggling with the subject. He, however, chose to pursue Accounting as it was the subject that he flourished in. You can call him Professor Modisane (PhD).

After identifying his strength in accounting, young Modisane proceeded to University of Pretoria to pursue his undergraduate and later post-graduate studies at the same institution, later to register and excel in his Master’s degree at the University of Johannesburg. Shy and soft-spoken Cam (to me he comes across as shy) has worked in several accounting firms, too many to mention, as an auditor and at one point he worked at the Auditor General’s office.

Later he acquired a PhD in Accounting from the University of North-West. He was not leaving any accounting stone unturned. As he narrates to me, getting a PhD was a result of never being satisfied, an ever-increasing urge to achieve more and the zeal to achieve more. He became the first black person under the age of 35 to obtain an Accounting PhD. We can safely say he secured a spot in the history books. Amazing!

Prof. Cameron is currently an Associate Professor in the College of Accounting Sciences at UNISA. His areas of research are around the impact of information technology and auditing profession and 4IR technologies to improve on the Auditing process. Working as a Professor at an established university was a gradual shift for him, “I am happy to be working in a varsity environment and creating new accountants.’ He speaks. Together with others, he is busy with CSI, trying to help struggling kids from a disadvantaged background. On his passion to plant back to the black community Cameron says, “I am trying my best to help those who want to get to my level of achievements”.

His coming out was a process which came through during his university years. When he got there, he was drawn to someone who later became his best friend. As best friends, he decided to tell him about his sexuality, only to realise that the BFF was also contemplating on coming out to him too. Taa-daa! Rainbow flags here, rainbow flags there. Must have been a good day. The university journey continued.

Friend done, family to go. Cam came out to his family after completing his honours degree as he wanted to make sure that he was established and had a good career going. Nonetheless, his family accepted and supported him.  I can imagine the relief.

In 2013 Cameron and his then fiancé made headlines when they tied the knot in traditional regalia. For Modisane getting married was a form of activism, visibility and taking a stance as a young black queer man. He says his marriage at that time opened a lot of eyes and sparked conversation in taking seriously the queer community and to be out there as part of society, hence, the traditional outfits. This was met with a lot of backlash as he experienced a lot of cyber-bullying from straight and queer people alike. But all this did not faze him at all. “From now on I have taken a step back, focusing on myself and bettering my career. I have shied away from most public spaces”. To this, he is grateful to maturity and being a political activist.

Though it be thrilling and a marvelous thing to be young, queer and gifted in such times, it is doubly so, doubly dynamic, to be young, to be queer, gifted and black. It’s possible black child. 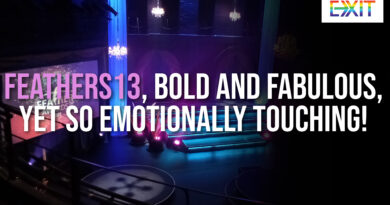 FEATHERS13, BOLD AND FABULOUS, YET SO EMOTIONALLY TOUCHING!